Adventures with Yokai: Test of Courage

In Night Parade Fusion the 3 types of Ribbon cards are:

When an inanimate household object or tool becomes very old it can acquire a spirit. The object becomes self-aware and may also sprout arms and legs. This category of yokai is often referred to as tsukumogami.

When a paper lantern transforms into a yokai, it becomes a Chōchin-obake. The lantern splits to form a wide mouth and a long lolling tongue springs out. It also sprouts one or two eyes. In some cases, it may even sprout arms or legs.

Like many other tsukumogami, Chōchin-obake are generally harmless pranksters that simply enjoy surprising and scaring people.

Hitodama are the souls of the dead. They appear as harmless balls of flame. They can vary in color from red to orange to blue, but they are commonly blue or bluish-white. Hitodama tend to have a short or long comet-like tail and float or drift a short distance above the ground.

Hitodama appear in cemeteries and near people shortly before or directly after they die. Sometimes hitodama may even appear while a person is unconscious, vanishing shortly before they wake up. Hitodama are mainly seen at night, but it is said that you can occasionally glimpse one in the daylight.

Hitodama are harmless, but they must not be confused with other fireball-like yokai, such as onibi, which can be very dangerous.

Kodama are spirits that live in very old trees.

Kodama are more often heard than seen. It is said that the delayed echoes in deep mountainous forests and valleys can be the sound of a kodama. When kodama are seen outside the trees they inhabit, they can take on the shape of glowing orbs of light, humanoid figures, or even something resembling a small forest creature.

It is said that kodama trees will bleed blood when wounded and that a great misfortune will befall anyone who cuts them down. Trees known to have kodama are often marked with shimenawa, a special rope used at Shinto shrines and holy sites. The location of kodama trees is passed down through the generations so that they can remain protected.

Adventures with Yokai: Test of Courage

Her breath left her in fleeting misty clouds that lingered before her like a lost spirit before fading into the night. She trembled, a combination of excitement, fear, and the cold.

Her arms may have looked like a plucked goose, but she grinned. She had made it beyond the old logging trail to the kodama tree. A huge knotted old maple marked by a thick twisted rice-straw rope.

The cemetery was just beyond the tree. All she needed to do was walk a little further, retrieve the old lantern, and return. The trial of courage would be complete and it would prove to the others that she was not small-livered.

She rested a moment to listen to the song of the cicada and the breath of the wind rustling the thinning amber leaves of the ancient tree. One of the branches groaned, it’s echo reverberating through the forest. The sound lingered for several long breaths and then faded away.

For a moment, she thought she saw a tiny doll-like figure peek out from between the branches. She did not fear the kodama, they were harmless spirits, and she was fortunate to have glimpsed one.

She continued forward. The earth was deeply rutted and wild with vegetation. The air musty-sweet with decay. It was a familiar autumn scent. Fungi, fallen leaves, and dirt. She tread carefully, arms extended, until she saw the small blue-white lights in the cemetery.

Hitodama. Undaunted, she gazed at them in wonder. They too were harmless, and more fascinating than frightening. They swayed lightly. To and fro. To and fro. As if they were floating on autumn’s breath.

She watched them for several moments before returning to her quest. The weathered lantern that hung from an equally weathered tree.

She reached for it, stretching her toes and tapping her fingers along the bottom of the ribbed washi paper to free it from the limb.

She lit it carefully, but the tattered paper did little to protect the flame. It bent and flickered with every motion. It cast broken patches of light in every direction that made shadows animate and the roots and rocks seem to suddenly appear.

After several steps, she decided that she had been better off with just the pale light of the moon.

She held up the lantern to blow out the flame. Two large eyes met hers.

She thrust the lantern away from her. It hung in the air. A long lolling tongue poked out from between the torn paper.

A scream filled her ears, hers or the lantern’s, she wasn’t sure. The lantern bobbed back and forth as if cackling.

She turned to run. Her foot struck against the rutted earth. She lurched forward, falling, and with a loud crack, she struck her head.

A blue-white light rose from her body. It lingered over her for a moment before drifting away on the cool autumn breeze. 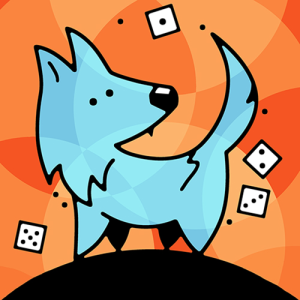